We took a dual approach to advertising the show. Traditional Circus styled “canvasing” and postering around the town, and a more modern social media and e-mailing approach. We strongly believed that the posters would create a community presence of the circus coming to town, while the social media and e-mail tactics were a more modern approach to allow that community to spread the info by word of mouth.

Our goal was to allow a mixture of university members and local families to see the show. That way we could look at the circus art form from an academic approach but with the energy that families bring to the ring.

We felt very successful in our advertising endeavors. The tickets were free for the event but had to be acquired in advance online or at the Box Office. Within two days of the tickets going live, all seats to the performances were “sold out.”

The posters were developed for 11″x14″ and 8.5″x11″ heavy card stock. Editing of images were done by Kingston Liu, Image coloring and formatting by Gerry Giovinco, and finalized for print by Michaela Campbell. Printing was done by N.K. Print and Designs. Postering occurred at the Downtown Mall, at schools, across the University of Virginia, and in various shops within Charlottesville, VA. 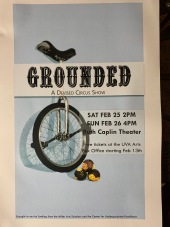 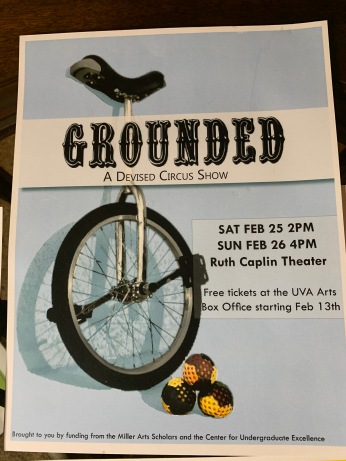 A simple way to “invite” members of the community to our event was through Facebook. We also advertised through the Department of Drama’s page where they could access the online Box Office.

We coordinated with various groups across our University and in the community to have their leaders send out e-mails to their members, providing a level of credibility and the feeling of having a large number of people spread the word. The blurb that they would send out read:

Come one, come all! The circus will be in town for a FREE two-time engagement! Members of Virginia Circus, UVA and Charlottesville’s premier circus club will present Grounded: A Devised Circus Show in the Ruth Caplin Theater on Saturday, February 25 at 2 P.M. and Sunday, February 26 at 4 P.M.

The show includes aerial performances, strong men, juggling, unicycling, clowning and more. If you’re lucky, you may even catch the lingering shadow of an elephant!

Many think that with the announced closure of the Ringling Bros. and Barnum & Bailey Circus is the end of circus arts. Looking around America and the rest of the world, it seems that this is far from the case. Circus is at a crossroads from the traditional sense of circus and the new style, commonly known as cirque. This show explores this crossroads and what it means for circus as a whole.

Tickets will become available at the UVA Box Office and online starting February 13th (Tonight starting at 12:01 AM). Tickets are limited, so get them before they go!

Playbills are a fantastic way to have the audience leave with something that may create a talking point after the show. We wanted to make sure that we provided that extra nudge to keep the conversation about circus going.

Sharing Our Story Down the Road

Caroline Newman wrote a wonderful article sharing our story that circulated around the University with stunning shots by Sanjay Suchak taken during one of our rehearsals while we pieced together the technical elements of the show.

In a photo essay encapsulating some of his favorite highlights from 2017 Sanjay Suchak included a section on our production.

The University of Virginia Arts Magazine used a shot from our show as part of the cover of their Spring 2017 issue. 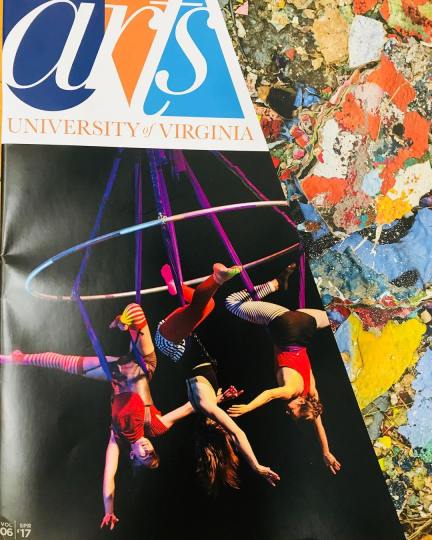